New investments in cargo and passenger vessels lead to reductions of up to 50 per cent in carbon dioxide emissions.

The ships carrying cargo and passengers in Finland are using technology that is only in the planning stage elsewhere in the world. In the future, the energy required by ships will come from electricity and wind, and by producing biofuels from waste. Finland is among the pioneers in using liquefied natural gas (LNG). Here is where you will find the world’s first passenger vessels running on LNG: the Viking Grace and the Tallink Megastar.

“We are heading in a very good direction. New investments in cargo vessels will lead to 50-per-cent reductions in carbon dioxide emissions and near-zero sulphur emissions. The situation here is exceptional, as four shipping companies – Viking Line, Tallink, Finnlines and Wasa Line – are all designing the most environmentally friendly and energy efficient passenger ships in the Baltic Sea, all at the same time. All of the ships will enter service in the next few years,” says Tiina Tuurnala, Managing Director of the Finnish Shipowners’ Association.

The ships for Tallink and Wasa Line are being built at a Finnish shipyard. Although Viking Line’s ship is being built in China, all of the companies’ new vessels involve Finnish and European innovations and technologies.

“The new ships will also have an ice class of 1A Super, so they will be excellent at operating in difficult ice conditions. It takes a lot of engineering work to combine energy efficiency, reduced emissions and good ice operation.”

The controversial Sulphur Directive, which was strongly opposed by businesses, entered into force at the beginning of 2015 and has had plenty of positive effects. The restrictions were a springboard for the development of LNG and sulphur scrubber technologies, which have benefitted the environment and become a profitable area of business for Finnish companies.

“In Finland, shipowners and companies in the marine industry collaboration on innovations – something that does not occur in many other countries.”

“Norsepower’s sail is a good example of this. The rotor sail first underwent several years of testing on a cargo vessel operated by Bore. This led to such good results that companies including Viking Line and the world’s largest shipping company, Maersk, have made agreements with Norsepower. For the Finnish business community, this is a good demonstration of how collaboration works and how global markets can be accessed.”

Indeed, Tuurnala believes that the emissions debate will soon be on everyone’s agenda.

“In the future, people will increasingly base their decisions on environmental friendliness.”

Shipping is the most environmentally friendly form of transport

At the beginning of July, the European Commission will publish European maritime traffic emissions for each vessel individually. The maritime sector is the only form of transport for which actual, measured consumption and emission figures will be published.

“This is the first year that maritime emissions will be measured globally. At the same time, we will receive factual information on how much is emitted and where the emissions take place. In the future, the information will be used by the International Maritime Organization (IMO) when it makes decisions. In this sense, shipping is a genuine pioneer among modes of transport,” says Tuurnala.

“We are currently going through a very interesting period of change. The largest breakthrough will take place over the next five or ten years.”

The next major global challenge is combating climate change. In April 2018, the IMO decided on global targets, which call for an absolute emissions reduction of 50 per cent by 2050.

“The volume of transport by sea is likely to grow dramatically by 2050, so the actual emissions restriction is considerably larger than 50 per cent. In May, the IMO’s environmental committee will meet to discuss short-, medium- and long-term actions to reach this target. After that, the IMO will release tangible actions for shipping companies to take.

Progress on the optimisation of logistics chains

Many ports are engaged in development projects related to information exchange and digitalisation. Similarly, the use of shore power will increase, and many ports already have the capability to offer this.

An important step in cargo operations is to optimise the logistics chain as a whole in order to minimise unnecessary waits and achieve better cost efficiency.

“Ports are highly important hubs in this endeavour. We can make major reductions in emissions simply by optimising the time spent on port operations. Such operations will be automated, and there are already good examples of various functions being automated elsewhere in the world,” Tuurnala says.

“We are currently going through a very interesting period of change. The largest breakthrough will take place over the next five or ten years. The digitalisation solutions may be slightly different in the cargo and passenger businesses, and they will transform the entire maritime sector. 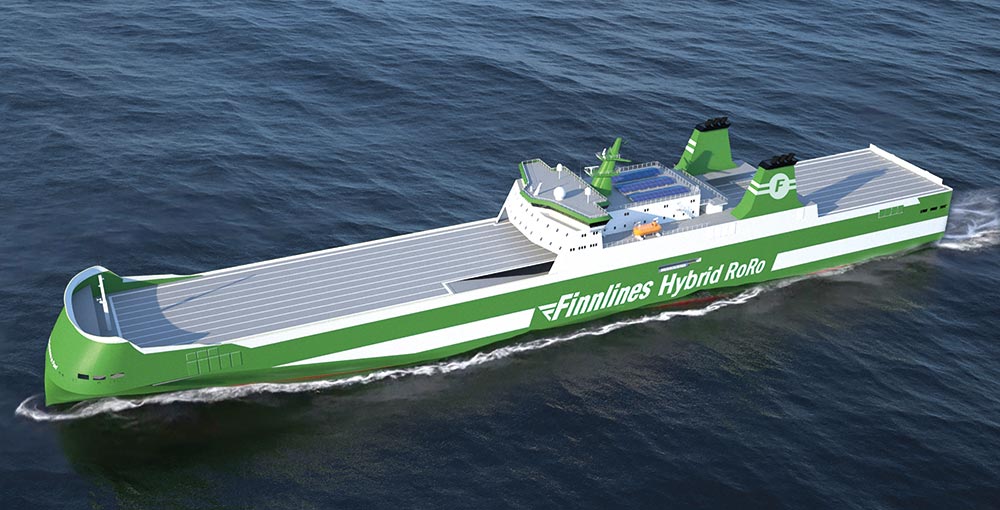 Grimaldi Group is investing EUR 200 million in new green technology for ro-ro ships. Three new hybrid ro-ro vessels will enter service in 2021 and 2022, with two-stroke engines that consume less fuel than the current four-stroke engines. The air lubrication system beneath the ships’ keels creates a layer of bubbles that decreases friction and hydrodynamic drag while reducing fuel consumption and emissions.

The ships will also be fitted with lithium-ion battery units, which will charge while the ship is sailing and ensure that the time spent in port will be completely emission-free.

The new vessels will also be larger than previous ones: they will be 238 metres in length with as much as 5,800 lane metres of cargo capacity.

Work began in 2018 on the conceptual design of Finnlines’ environmentally friendly Superstar series of ro-pax vessels, and the ships are likely to be delivered in 2021 and 2022.

The vessels will be equipped with technology designed to reduce airborne emissions, as well as other advanced systems for reducing fuel consumption. LNG is also under consideration for use as a fuel.

The design process involves examining solutions for automatic mooring so as to accelerate the process of mooring and unmooring. The time saved on this will increase the average speed of the journey, thereby reducing fuel consumption and emissions.

The new vessels are substantially larger than the existing Star-class ships.