Sustainable development is a priority project - Carbon emissions eliminated by 2035

The Port of Helsinki has made sustainable development a priority project. Fossil fuel consumption will be reduced, with the goal of becoming carbon neutral by 2035. CEO Ville Haapasaari encourages all port operators to make considerable reductions in their emissions.

Ville Haapasaari says that Finland’s ports have been doing good work for the environment for quite a long time.

“Environmental permits specify norms and regulatory bases, but permit regulations are not enough. Those with an eye to long-term success know that the basic level must be exceeded.”

During 2019, the Port of Helsinki has been investing in sustainable development more than ever before. One of our key projects has been defining our carbon-neutral objectives.

“Reducing emissions has become our number-one priority. The goal is for the Port of Helsinki’s own operations to be carbon neutral by 2035 and to reduce emissions in the harbour area by more than 30 per cent,” says Ville Haapasaari.

Reaching this target will require major technological changes not only in port infrastructure, but also from customers and operators. The Port of Helsinki itself accounts for about five per cent of the harbour’s carbon dioxide emissions. The majority of emissions are therefore generated by the Port’s partners, such as shipping, stevedoring, warehousing and transport companies.

“More extensive use of LNG, biodiesel and renewable energy sources would mean considerable investments. It would be a long-term project. Investments in this industry are considerable, and made with a view to ten years in the future.”

Investments also require money. Haapasaari says that, in the coming years, the Port of Helsinki has prepared to invest about EUR 2 million per annum in reducing emissions.

“Old technologies are gradually being replaced by new ones. We’re conducting energy analyses at various terminals, and investing in solar panels and geothermal pumps for buildings. Gate operations are being automated at both passenger and cargo ports. We have a long list of large and small items that are all targeted at improving efficiency and reducing emissions.”

Ways to help the Port’s customers and partners to reduce their emissions include shore power solutions for ships, recycling, more efficient port logistics, and price incentives.

“When it comes to the carbon footprint of vessel traffic, it’s not only fuel that’s very important – the way ships arrive at and depart from the port also has a big impact. For example, digital traffic control and automooring systems can make port operations significantly more efficient. The increased use of shore power will also have an impact,” says Haapasaari.

“When it comes to the carbon footprint of vessel traffic, it’s not only fuel that’s very important – the way ships arrive at and depart from the port also has a big impact.”

Although shore power is currently available at only one quay in Katajanokka, the Port of Helsinki plans to invest in one new set of electrification equipment per year. Haapasaari reminds us that shore power will not be of the greatest benefit to ships that only moor for a short time.

“For example, Tallinn-bound passenger ships only spend about one hour at the West Harbour. Connecting to shore power for a very short period does not really help to reduce carbon emissions,” says Haapasaari.

Due to the increase in Tallinn-bound traffic, Helsinki has gradually become Europe’s busiest passenger port. And passenger traffic still appears to be increasing. The number of passengers passing through the Port of Helsinki will exceed 12 million in 2019, and traffic between Helsinki and Tallinn will account for almost nine million of these passengers.

Vehicle-passenger ferries also transport a significant proportion of Finland’s foreign trade cargo. Heavy goods traffic in downtown Helsinki roads leading to the West Harbour has occasionally sparked off rather lively debate. One potential solution was a subterranean feeder route under the city centre, but plans for this central tunnel were shelved by the City in the autumn on financial grounds.

“In early 2020, heavy goods traffic will be directed to and from the port along the same route, down Tyynenmerenkatu. This will, in practice, remove all trucks from Jätkasaari’s residential areas.

Another proposal is to transfer passenger traffic out of the centre, for example, to Vuosaari. Ville Haapasaari wants to settle the debate and hopes that smaller steps can help to resolve traffic congestion issues.

“Congestion around the West Harbour is a last mile problem for which solutions are being sought. In early 2020, heavy goods traffic will be directed to and from the port along the same route, down Tyynenmerenkatu. This will, in practice, remove all trucks from Jätkäsaari’s residential areas. Bridge and ramp solutions to facilitate traffic flow are also being planned.”

Haapasaari does not consider the idea of transferring passenger traffic out of the city centre to be either sensible or feasible. More heavy goods vehicles could, however, be steered from the centre to Vuosaari.

“We’ve been testing pricing incentives for a while now and the results have been good,” says Haapasaari.

Finnlines, Eckerö and Tallink operate passenger services from Vuosaari to Muuga in Estonia and Travemünde in Germany. These routes bring diversity, but their volumes are still quite modest and passenger numbers are only a couple of per cent of those at the West Harbour.

“The Port of Helsinki must serve both cargo and passenger traffic, and passenger traffic is extremely important to businesses in the city centre. It now seems clear that no decision will be made on the underground feeder route any time in the coming years, and we just have to live with that,” says Haapasaari.

“And even that would not be a quick solution. We’re talking about a process that would take 15–20 years from planning decision to completion. The West Harbour has a fine new passenger terminal and is well equipped to serve vehicle-passenger ferries, which is a clear and functional concept in the Baltic Sea. Ships have been built on the basis of this concept – that heavy goods traffic and passenger traffic will live together and develop hand-in-hand. In other words, we need to find solutions to road traffic bottlenecks in the next few years.”

Thanks to an increase in passenger numbers and improved terminal services, the Port of Helsinki has made ‘a seamless passenger experience’ one of its strategic cornerstones. It will be developed with the aid of, for example, systematic customer satisfaction surveys. Surveys conducted at regular intervals will keep the Port up to date with customers’ requirements and wishes. How can the Port contribute to a customer experience for which the shipping company holds ultimate responsibility?

“Smooth boarding and disembarking are naturally important. We’re also introducing a variety of services in terminals for different customer groups, such as families with children and Asian tourists. Digital vehicle identification will make it quicker to board passengers travelling by car. A workable whole is made up of small parts,” says Haapasaari.

In spite of a slowdown in the national economy, traffic volumes at the Port of Helsinki have remained roughly at 2018 levels. Almost 11 million tons of unitised cargo, which generates the Port of Helsinki’s greatest volumes, was transported in the January–November period of 2019. In practice, this is the same amount as in 2018. Imports of unitised cargo had contracted by 0.8 per cent by the end of November, but exports had risen by 0.5 per cent.

The largest changes in cargo traffic have occurred in bulk cargo. Imports of bulk cargo during the January–November period fell by one fifth on the previous year, but exports rose by a fifth during the same period.

Passenger statistics show that, by the end of November, passenger numbers on scheduled routes had risen by just under one per cent on 2018. The Port of Helsinki registered almost 10.7 million passengers on scheduled routes during the January–November period. The number of international cruise passengers rose by a handsome 16.7 per cent. The number of cruise passengers broke the six hundred thousand mark for the first time in 2019. 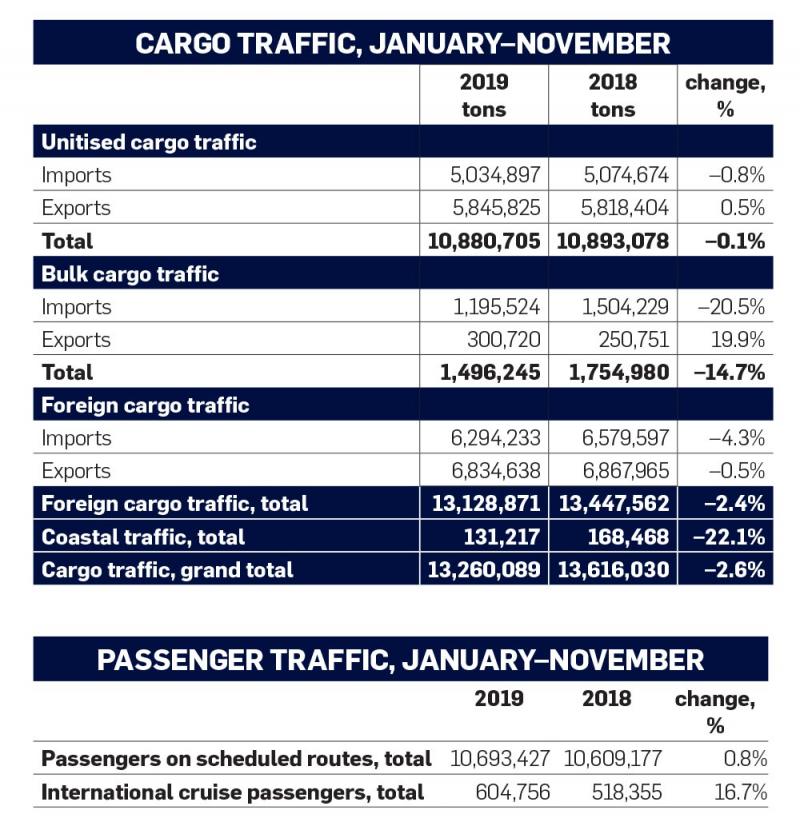