The indoor and outdoor lighting of West Terminal 2, completed in 2017, has been implemented using energy-efficient LED lights, but the extensive field lighting of Vuosaari Harbour was instead implemented with high-pressure sodium and metal-halide lamps at the time the harbour construction was finished. They were the natural choice: when the harbour area was completed in 2008, there were no sufficiently efficient LED lights available. 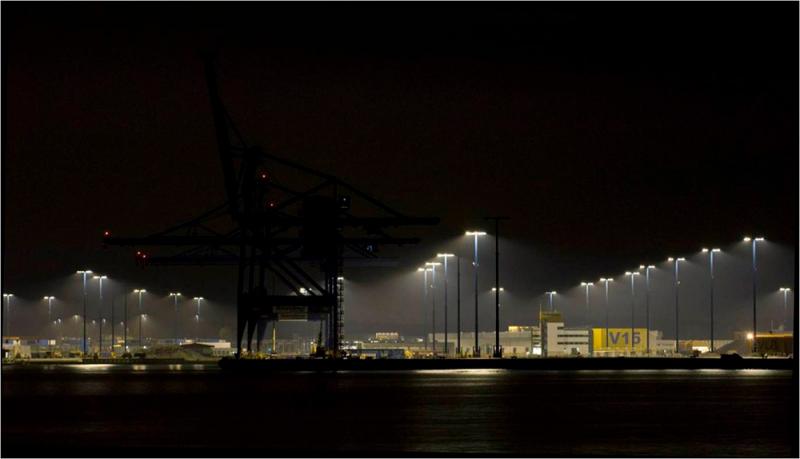 The lighting system of Vuosaari Harbour’s closed harbour area (150 ha) includes 76 light masts with 908 individual lights that have a total of 1,816 lamps. The lamps are located at a height of about 40 metres. The system also features separate lighting modes for working time and night time as well as extra lighting and special jetty and corner lights. The amount of diffused light carrying to the nearby areas has been restricted significantly. The original total wattage of the area’s lighting system was around 1.2 MW.

Like its owner, the City of Helsinki, the Port of Helsinki is also committed to the goal of achieving a carbon neutral Helsinki by 2035. The Port has compiled its own strategy and action plan, in which more efficient use of energy plays a central role.

Great energy savings have already been achieved in the field lighting of Vuosaari Harbour with control and operational changes: the harbour’s own energy consumption has been cut down to less than half of what it was during its first operational year. In the spirit of continuous improvement, further improvements in the energy consumption of the field lighting will be sought, although it is not possible to achieve as extensive savings.

As more powerful LEDs have been developed, and especially now that white LED has been invented, LED lights will also gradually start to be used in the lighting system of Vuosaari Harbour, which has many advantages. Lamps will be changed cost-effectively as they come to the end of their lifecycle. It is estimated that LEDs will be used for the entire field lighting system of Vuosaari Harbour by 2030.

The many advantages of LED lighting