As a result, the Port of Helsinki and the Port of Tallinn develop their port operations in cooperation. The Twin-Port project, which is funded by the EU, is one of the most significant ongoing cooperation projects between the two ports.

Helsinki and Tallinn - The Twin City 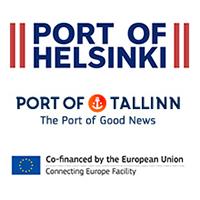 Helsinki and Tallinn provide significant economic benefits to each other. The two cities could even be considered to be a common economic area, where the density of ship traffic is one of the busiest in the world, and passenger numbers rival those of the largest global ports. Tallinn and Helsinki form a common area for entrepreneurship and jobs, a practical twin city, whose economic significance is growing on both sides of the Gulf of Finland.

The ferry connections between Helsinki and Tallinn are part of the economically significant EU core network corridor to Central Europe. The connection from West Harbour to Tallinn is the fastest way to access the road and rail networks of Central and Southern Europe.

The EU’s traffic network development is guided by the TEN-T (Trans European Transport Network) programme, in which overseas transport routes, or Motorways of the Seas (MoS), play an important part from the perspective of Finland. The significance of the connection between the West Harbour and Tallinn’s Old City Harbour has continued to grow in recent years.

The road and rail connections through Finland and the Baltic states are the shortest and fastest way to access Central Europe. The passenger and cargo traffic services of the Via Baltica area are already operating quite smoothly. The planned EU rail connection, the Rail Baltica, from Tallinn to Warsaw and onwards to Berlin, will offer a cost-effective connection from Helsinki to the Central European rail network, all the way to the countries on the coast of the Adriatic Sea.

As part of the EU’s TEN-T programme, the Port of Helsinki and the Port of Tallinn are developing port operations with the joint Twin-Port project, the primary emphasis of which is on cargo traffic. The Twin-Port project focuses on the development and harmonisation of operations at the West Harbour in Helsinki and the Old City Harbour in Tallinn. In Helsinki, the capacity of the West Harbour port area will be increased through the reformation of harbour operations, traffic systems and road connections. The development of automation and the application of new technologies has already reached the pilot phase. The goal is to create a harbour that is suitable for various kinds of traffic, the operation of which is efficient and environmentally sustainable.

The EU is also providing funding for the improvements of the West Harbour and Tallinn’s Old City Harbour. The majority of the funding awarded to the ports will be used for the development of Helsinki’s West Harbour.

The development of the West Harbour

Improvement of the traffic system: