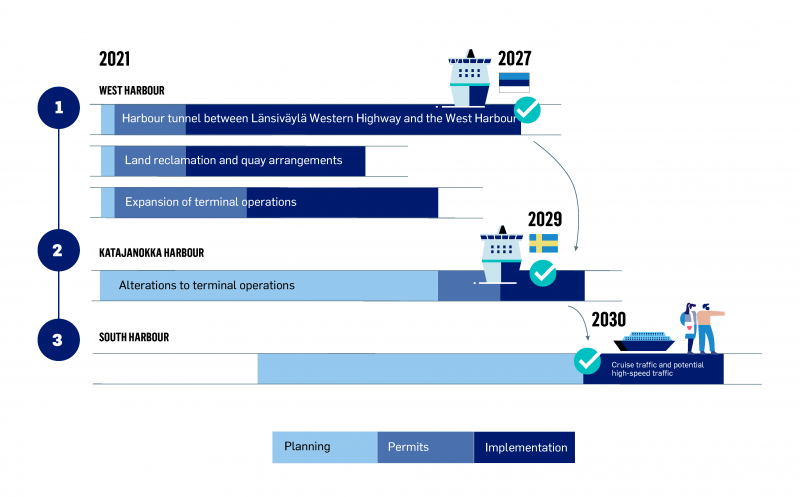 The development programme will be implemented one part at a time, in a planned and managed order. The previous project will always affect the next part. The arrangements in one part of the port will affect the arrangements in other harbours, and the project in its entirety cannot be separated into different sections. For example, the passenger and car ferry traffic in the South Harbour will continue until the Katajanokka arrangements and the West Harbour’s harbour tunnel have been completed.

First stage: The West Harbour will be prepared to receive all traffic from Tallinn.

First, the West Harbour will be prepared to receive all traffic from Tallinn. The first measures will be the construction of the harbour tunnel and increasing the available quay and field capacity in the West Harbour.

The development programme changes in Katajanokka and finally the changes in the South Harbour will only be carried out after the completion of the harbour tunnel and the West Harbour. The terminal in Katajanokka will be renewed and next the focus will be shifted to Stockholm traffic. The Makasiini Terminal will be demolished in the South Harbour, and the Port of Helsinki will leave the Olympia Terminal and Satamatalo for the City’s use. The only port operations remaining in the South Harbour will be some international cruise traffic as well as an option for potential high-speed vessel traffic.