Restricting the rise of the average temperature of the earth through cutting carbon dioxide emissions is the shared global goal of humanity. Together with its owner, City of Helsinki, the Port of Helsinki is committed to implementing the Carbon-neutral Helsinki 2035 Action Plan.

The Port of Helsinki’s own objective is to make its port operations 100% carbon-neutral by 2035. Energy efficiency and the use of renewable energy are central to this effort. How energy is generated and how much of it we use are key from an environmental perspective.

In order to reach this goal, the port drafted the Carbon-Neutral Port 2035 programme in 2019. The programme measures will reduce port area emissions by 32% compared to 2015 and make Port of Helsinki Ltd 100% carbon-neutral by 2035. 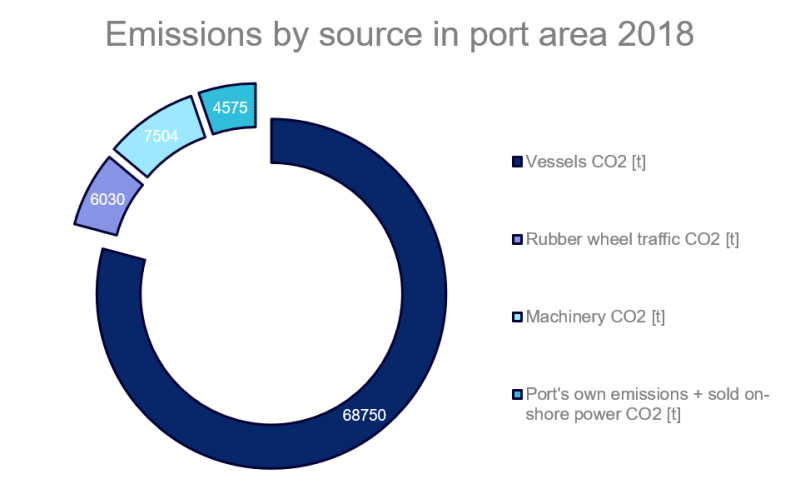 Emissions generated by Port of Helsinki Ltd actually account for only a small proportion of the carbon dioxide emissions of the port, but they are tackled nonetheless. The goal of the port is to reduce its energy consumption drastically and acquire the remaining necessary energy from carbon-neutral energy sources. Carbon offset is the last option on the route to carbon-neutrality.

The Port of Helsinki’s own objective is to make its port operations 100% carbon-neutral by 2035.

The majority of the company’s energy consumption is caused by area lighting and heating of properties. Energy consumption is further reduced by switching to LED lighting, streamlining heat recycling and recovery, improving premises’ resource efficiency, increasing the retention of solar power by the port and utilising sea water more efficiently in cooling and heating, for example.  Most of the planned emission reducing measures will be executed in the next five years.

Other sources of emissions, such as vessel traffic, vehicle traffic or machinery are influenced indirectly by the port by offering incentives to use low-emission or carbon-neutral alternatives.