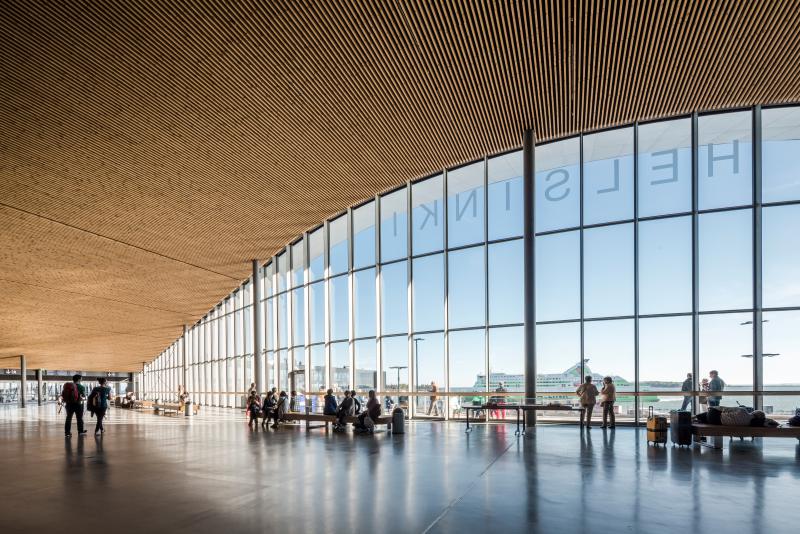 According to the competition jury, West Terminal 2 is a good example of the combination of architecture, functionality, and lighting. The design is based on a well-thought-out overall concept, which was carried out through positive cooperation between various design branches.

The Port of Helsinki’s West Terminal 2, opened in February 2017, was designed by Tuomas Silvennoinen and Pekka Mäkelä from PES-Arkkitehdit Oy. Sanna Forsman and Matti Syrjälä from Granlund Oy were responsible for the lighting design.

West Terminal 2 was built to serve fast liner traffic, so guidance is one of the functions of the lighting. According to the jury, the simple idea of a linear line of light in the West Harbour terminal, carried out using various applications in ceilings and handrails, is an insightful way of supporting the guidance of passengers through the terminal building.

The light fittings and other technologies have been successfully integrated into the ceiling structure made of thin wooden laths, which makes the space calm and eliminates any glare.

‘From the very start, the Port of Helsinki aimed for the building to represent both functionality and high level architecture. This was never compromised, and the fluency of the operations could be combined with architecture, creating a unique combination, in both design and implementation’, says Ari Parviainen, who was in charge of the Port of Helsinki’s West Terminal 2 project.

This was the fifteenth time that the Finnish Lighting Awards were presented. The competition included sites completed between 15 August 2015 and 15 August 2017, and winners were selected for two categories, internal and external lighting.

The jury consisted of: