The largest hydraulic crane in the world at Vuosaari Harbour

M.Rauanheimo’s new Mantsinen 300 loads pulp from Ääneskoski at Vuosaari Harbour. The parts of the largest hydraulic crane in the world arrived at the harbour in late November 2017. Following an assembly and deployment period lasting approximately two weeks, this massive piece of lifting machinery is now ready to handle demanding loading tasks.

The transportation of pulp from the distribution centre of Metsä Group’s new bioproduct mill in Äänekoski to the company’s export warehouse in Vuosaari, completed in May and operated by M.Rauanheimo, has started smoothly. By November, the harbour was receiving 11 trains pulp per week, with full transportation capacity expected to be reached in 2018.

Some of the pulp continues on immediately from the harbour in sea containers, while the rest stays behind in the warehouse, waiting for transportation by break bulk ships. The harbour was visited by several smaller ships picking up pulp in early autumn, and the first large Chinese cargo ship, with a capacity of approximately 20–30,000 tonnes, arrived at the harbour just after Christmas. The loading of such a massive ship is a demanding operation, which the Mantsinen 300 is well-equipped to handle due to boasting the fastest work cycle on the market and the best productivity in its size class. 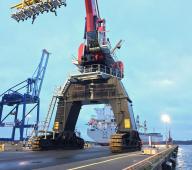