Helsinki is the number one general port for international freight traffic in Finland.

In 2017, Helsinki grew to become the busiest passenger port in Europe and possibly the entire world with 12.3 million passengers. Passenger numbers continued to increase on the Helsinki-Tallinn route in particular, reflecting the development of Helsinki and Tallinn into ‘twin cities’ with close economic and social ties. Meanwhile, liner traffic to Stockholm, St Petersburg and Travemünde remained stable, as it has for several years, while international cruise traffic increased significantly.

The highest passenger numbers in Europe

In 2017, the Port of Helsinki’s total number of ship passengers grew by 2.4% compared to the previous year. The number of liner traffic passengers alone grew by 1.8%, to 11.8 million. A total of 9 million passengers (+3.2%) passed between Tallinn and Helsinki, while 2.3 million (-0.1%) passed between Stockholm and Helsinki. During the year, Helsinki also recorded 266 international cruise ship visits and 478,000 (+ 16.8%) cruise ship passengers, which was an all-time record.

– In recent years, shipping companies have introduced larger and faster ships for the Helsinki-Tallinn route, while also increasing their passenger capacities during peak seasons, says Director Kari Noroviita, who is in charge of passenger harbours at the Port of Helsinki.
– The Port of Helsinki, meanwhile, has responded to demand by significantly increasing its capacity for fast scheduled traffic to Tallinn with the opening of the new West Terminal 2 and related area arrangements in February 2017.

The united economic area formed by Helsinki and Tallinn is based in part on flexible and frequent ferry traffic between the two cities. One of the latest trends in the area is the increasing popularity of Finland and the Baltic Sea among Asian tourists in particular.

Please accept the marketing cookies to be able to watch the video. Open the marketing cookie approval from the gear icon in the lower left corner of the browser window. If you can’t find the gear icon in the lower-left corner of your browser window, make sure that any advertising blocking technology is turned off in your browser settings.

The busiest general port in Finland for international freight traffic 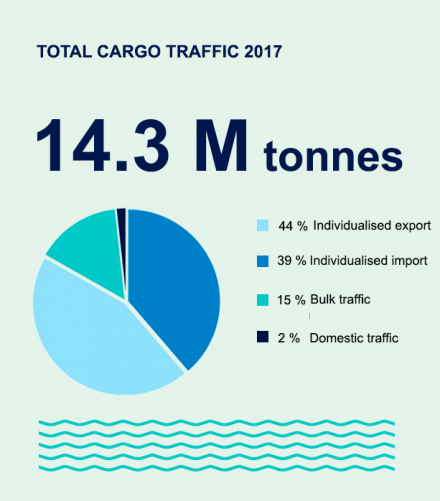 – The sizes of container and ro-ro ships are growing, which is a trend that has continued for several years now. Traffic volumes are expected to keep increasing in the future as well, predicts Jukka Kallio, the director of Vuosaari Harbour.

The Port of Helsinki Ltd is the busiest passenger port in Europe. We create a seamless framework for sea traffic to destinations such as Tallinn and Stockholm. The Port of Helsinki is also Finland’s leading general port for international cargo traffic, serving the business world and well-being of the Helsinki region and the whole country.