Products of animal origin to be inspected in Vuosaari Harbour

The range of services offered at Vuosaari Harbour will expand when the Finnish Food Authority relocates the veterinary border inspection post serving the harbour to Vuosaari Harbour’s gate area. This will allow products of animal origin arriving in the country to be inspected more easily. 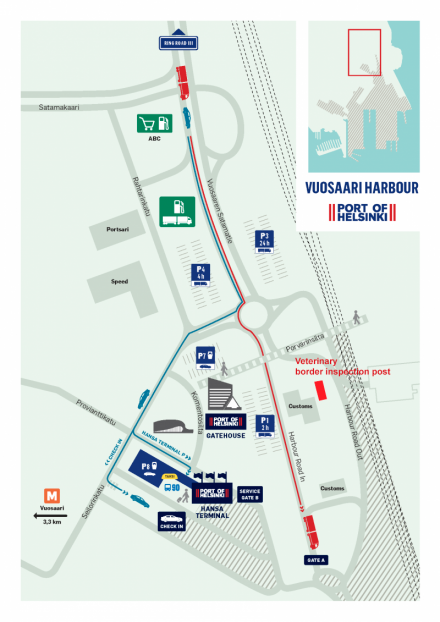 – The border inspection post inspects all products of animal origin, as well as foodstuffs and by-products, that come directly from outside the EU. A lot of meat and fishery products, such as canned tuna, are imported to Finland via Vuosaari Harbour. Most of the by-products are fodder, mostly dog bones, says Head of Veterinary Border Control Kitty Schulman from the Finnish Food Authority.

–It makes our customers’ everyday life much easier when the inspections are carried out at the port. The inspection post also complies with the latest EU requirements, she continues.

The Port of Helsinki has commissioned multi-purpose premises for border control in Vuosaari Harbour’s gate area, near the V6 and V7 buildings. The premises will have a floor area of roughly 360 m2. A contract for the building’s construction has been signed with Kymppirakenne Oy. The work started in April 2020, and the aim is for the Finnish Food Authority to move into the premises at the beginning of 2021.

Senaatti-kiinteistöt will lease the premises from the port and sublease them to the Finnish Food Authority as a border inspection post.

The Port of Helsinki will be in charge of the property’s maintenance in the future, which is why particular attention was paid in the planning phase to things such as energy efficiency, rather than just the costs of construction.

– The costs incurred from the planning, construction, use and maintenance of the premises were taken into account in full.
Lifecycle thinking and low emissions also support the realisation of the City of Helsinki’s sustainable development targets, Port of Helsinki Development Manager Pekka Hellström says.