David Lynch exhibition for the first time in Finland

This year, Helsinki Photo Festival celebrates its fifth anniversary with two extraordinary exhibitions: The retrospective show featuring artists from more than fifty countries and the must-see Infinite Deep exhibition by David Lynch. Both exhibitions will take place at the Helsinki West Terminal 1 in Jätkäsaari. 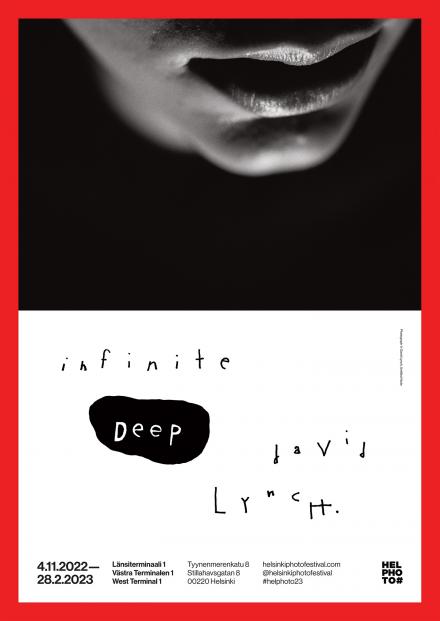 The retrospective exhibition of the festival presents all the themes displayed from 2018 to 2022: Love, Anarchy, Trust, Fearless and Believe, as well as three solo exhibitions by Dilla Djalil-Daniel, Arianne Clément and Carl-Mikael Ström. The Infinite Deep exhibition showcases the surreal photography of David Lynch for the first time in Finland! It is curated by Danish photographer Christian Nørgaard, who has exclusive access to David Lynch’s photo archives.

Known by most as the film director of such award-winning masterpieces as Eraserhead, The Elephant Man, Blue Velvet and Twin Peaks to name a few, 76-year-old David Lynch has long established himself as a musician, artist and photographer. Infinite Deep presents David Lynch as the most
important visual artist of our time. The focus lies on his photographic works, showcasing Lynch’s long and important artistic career, allowing the visitor to meet David Lynch’s versatility within the photograph for the very first time. The works are exhibited with a red artistic thread, which takes the
spectators on a thought-provoking journey. They challenge, provoke and invite the inquisitive visitor to enter a subtle visual world.

The exhibition is divided into five parts - Snowmen, Factories, Nude, Distorted Nudes, and Portraits - that provide the framework for a unique opportunity to explore Lynch’s photographic works and to help understand his artistic way of approaching scenarios that have inspired and influenced his films. The exhibition features the short film Fire (Pożar). The short is written, directed, and drawn by David Lynch, with music performed by the Penderecki String Quartet and written by Marek Zebrowski.

About the Distorted Nudes picture series, David Lynch says: "Distorting these anonymous photographs was a dream come true. If you want to catch little fish, you can stay in the shallow water. But if you want to catch the big fish, you've got to go deeper. Down deep, the fish are more powerful and purer.”

The exhibition will take place in Helsinki’s West Terminal 1, where the vibes are certainly in concord with the atmospheric Infinite Deep. The now-decommissioned ferry passenger terminal was used for decades for travels between Finland and Estonia. Designed by Gunnar Taucher, the building was completed as a port warehouse in 1941. In 1992, it was decided to convert the building into a passenger terminal serving Tallinn's shipping traffic and it was opened on May Day 1995. Currently, the building is planned to be demolished and replaced by a new terminal building by 2026. Meanwhile, the Helsinki Photo Festival will take over part of the building and convert it for several months into a cultural hub – a democratic space for celebrating photography and visual culture.